In food animals, antibiotics are used mainly for two purposes: treatment and growth promotion. For enhancing growth and productivity, antibiotics have been used by poultry producers either in-feed application or in-farm medication since a long time. Constant use of antibiotics can possibly lead to the emergence of resistant strains of bacteria which is a global concern. Several countries already banned antibiotic usage in animal feed for growth promotion. With growing awareness among people, the consumer preference is shifting towards antibiotic free (ABF) meat and meat products. This necessitates inclusion of alternatives in animal feed for replacing antibiotics. Several products available inthe market are used for replacing antibiotics intended forgrowth promotion, which includesprebiotics, probiotics, organic acids, essential oils, etc. Among these, probiotic plays a vital role in managing intestinal health and improving productivity of birds.

PROBIOTICS AS AN ALTERNATIVE TO AGPs

Probiotics can be defined as “live microorganisms which when administered in adequate amounts confer a health benefit on the host”. Several probiotic products of various compositions are available for use in poultry and is commonly administered to the birds either through feed or via drinking water. The common microorganisms used in probiotics for poultry include Lactobacillus spp.,Bifidobacteriumspp., Bacillusspp., Enterococcus spp., Streptococcusspp., Saccharomycesspp., Candidaspp., etc. Several studies conducted throughout the globe demonstrated the effect of these microorganisms in improving intestinal integrity and production parameters of birds. The reason for probiotics being a potential alternative for AGPs in chicken diet are discussed as below.

One of the mechanisms by which probiotics prevent colonization of pathogenic bacteria in intestinal mucosa is the mechanism of competitive exclusion. Microorganisms need specific receptors on the surface of a host cell to attach on to. When one species of bacteria strongly competes for these receptors with other bacteria and prevent the latter from attaching to the host cell surface, thereby excluding it from colonizing, this mechanism is called competitive exclusion. Several studies have demonstrated the effect of Lactobacillus spp., Bacillus spp., Streptococcus spp. etc. on reducing pathogenic bacteria like Salmonella enterica, Clostridium perfringens, Escherichia coli, Helicobacter pylori, etc. in the chicken intestine through competitive exclusion.

The second mechanism of microbe control by probiotics is through antimicrobial substances. These antimicrobial substances are either organic acids like lactic acid, acetic acid, etc. or metabolic products known as bacteriocins. Organic acids exhibit antimicrobial effect by reducing the cytoplasmic pH and disrupting cytoplasmic enzyme reactions leading to exhaustion of bacterial cell, which ultimately causes death of the pathogenic bacteria. Bacteriocins destroys the target bacterial cell by either forming pores on the cell wall or inhibiting cell wall synthesis. Bacteriocins are specific to target bacteria. For example, secondary metabolite ‘surfactins’ produced by PB6 strain of Bacillus subtilis have antimicrobial activity against Clostridium perfringens. 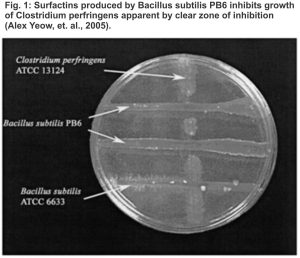 Inflammation can be defined as the manifestation of host immune system in response to alterations in tissue homeostasis. Inflammation of the intestine, also known as enteritis, reduces the functionality of intestine affecting digestion and absorption of nutrients. Probiotics help in reducing inflammation of the intestine by maintaining healthy balance of bacteria in the digestive tract, strengthening epithelium barrier, and regulating toll like receptor expression of intestinal epithelial cells and inhibition of tumor necrosis factor alpha (TNF-α).

Another important function of probiotics is enhancing immune system associated with gastrointestinal tract (GIT). The most pronounced effect is on the innate immune system of GIT. Intestinal epithelial cells and dendritic cells interact with pathogens at certain specific receptors called toll-like receptors (TLRs) present on them. Pathogens have specific surface structures called pathogen-associated molecular patterns (PAMPs), which are shared by the vast majority of pathogens. The TLRs present on intestinal epithelial cells and dendritic cells interact with PAMPs and trigger immune response to eliminate pathogenic bacteria. Studies have shown that probiotic supplementation in chicken increases the gene expression of TRLs, which recognizes bacteria and incites necessary immune response to neutralize the pathogen.

Probiotic bacteria also produce short chain fatty acids (SCFAs) in the intestinal lumen. These SCFAs acts as an energy source for enterocytes and help in its proliferation,thus enhancing the intestinal villi development. It has been demonstrated that SCFAs reduce inflammation in the intestine by regulating the interleukins and TNF-α. SCFAs (especially butyrate) have antibacterial effect, thus helpingto reduce pathogenic bacterial load and enhancing commensal bacteria in GIT. 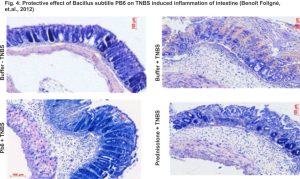 Several experiments have been conducted to study the effect of probiotics in improving birds’ performance and is well documented. It has been found that feeding probiotics to commercial broiler birds improved body weight gain and feed conversion ratio (FCR). The improvement in performance of commercial broiler birds fed probioticswere comparable to what is achieved by using AGP alone (Fig.5&Fig. 6), which advocates its potential to be used as a substitute for AGP. Improvement in carcass trait was also observed in broilers supplemented with probiotics.

Thus, it is apparent that supplementing probiotics in the chicken diet help in improving birds’ intestinal health and performance parameters. With restriction on usage of AGPs in food animals and changing consumer preferences to antibiotic free meat products, looking for AGP alternatives is the need of the hour. Probiotics have considerable potential as an alternative for AGPs. Reducing pathogen load in GIT and intestinal inflammation, improving intestinal integrity, better nutrient absorption and improved birds’ performance is expected from AGPs, and probiotics stand out in delivering these goals. Selecting the right probiotic product amongst many available in the market is imperative, as it should be able to deliver the majority of advantages offered by AGPs. Spore forming probiotic bacteria (like Bacillus subtilisPB6) to withstand high pelleting temperature and low pH in GIT, the temperature during the feed manufacturing process and target pathogen that needs to be controlled, can be the criteria for deciding right probiotics to be used for improving birds’ health and performance.